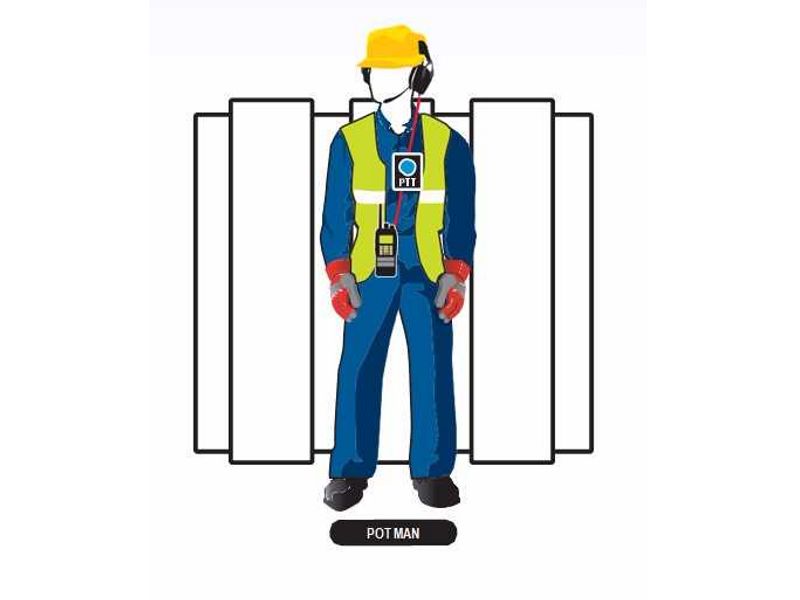 Description System Consists of the following components
The "Pot Man" wears a simple lightweight headset fitted with a boom and noise cancelling microphone.The headset fitted with a boom and noise cancelling microphone. The headset section is connected to a large and robust "push to talk" (PTT) button, and then to a UHF hand held radio, that can be either clipped to a belt or put in a pocket. Each "blaster" wears a communications headset under the blast helmet (or intergrated into the helemet). The headset has a slim boom microphone cartridge. The headset is then connected to a large,robust "push to talk" (PTT) button that is worn on a belt.This button is then connected to a UHF hand held radio. System Configuration
The "Pot man" is sited near the machinery.Each "Blaster" (Any number) wears the communications system under the standard blast helmet, and wears the blue button on a belt. The radio can be then put inside the blast overalls.When one presses their big blue "push to talk" (PTT) button ,all the other users connected to the system will hear the message. When the button is released, the system goes quiet.When a user wants to be disconnected from the system, you simply report in via radio, and then turn off the radio.Another user can connected to the system at any time (No downtime to switch blasters). Depending on the enviroment this system can be used to clear communications up to 1KM from thePot man.A supervisor can monitor all communications between all the users by listening on another hand held radio unit.